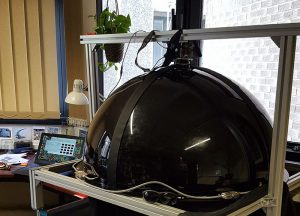 the dome built for the University of Glasgow

After many years of making RTI systems for museums we have a good design which enables fast capture of objects using a digital SLR and our lighting dome.

76 high power LEDs (1000 lumen) are controlled by our custom Arduino computer which triggers the camera. After setting the exposure time on the controller a full sequence is captured automatically in under one minute.

We have developed a vibration-free camera and dome mount – this lifts the dome well above the surface used to make it easier to setup objects.

People typically use the “normal” RTI software for calibration and viewing – together with our helper software to manage the image sets. Pressing the Go button captures all the images on to the camera card which is then downloaded and a PTM image produced in around a minute. We have an optimised version of the PTM fitter which easily copes with large images and runs much faster than the original.